What are Google’s New Link Attributes and What do They Mean for External Linking?

A few days ago, Google announced that it was bringing out two new link attributes to help their crawlers identify the nature of links. This post looks at what the new attributes are, when to use them and what they mean for SEO.

On 10th September 2019, the official Google Webmasters sent out the following tweet:

Today, we’ve announced two new link attributes – “sponsored” and “ugc” – that join “nofollow” as ways to identify the nature of links. All will now work as hints about which links Google Search should consider or exclude for ranking purposes. More details:https://t.co/V6X2xjEC5L

It sparked a flurry of reactions from SEOs on Twitter and in the blogosphere, with some panicking about the implications this could have for external linking strategy.

Many, however, were quick to reiterate Google’s own messaging that these attributes are simply a choice for SEOs, not compulsory.

But more on that later – first of all, what are the new attributes?

Offshoots of the rel= “nofollow” attribute

The “nofollow” attribute appeared back in 2005. By adding

Originally, use of the “nofollow” attribute on a link meant that no PageRank value (Google’s own domain metric – read more here) was passed on and that Google wouldn’t take this link into account as part of its algorithm.

However, as Google states in its recent Webmasters Blog Post, the web has evolved since then. While the nofollow still prevents Google seeing a link as a full endorsement, it is still taken into account as a “hint” to help Google determine the content and relationship of sites on the web.

This is why they have introduced the two new attributes: to allow more granular control of how Google sees your outbound links. They will act as further “hints” to Google about the nature of external links.

“ugc” stands for “user generated content” and is designed to be used for links found in forums, blog comments and other places where users are able to add their own content. Spammy links from forums and blogs has long been an issue that search engines have battled with – this new attribute aims to help with that issue.

As you may be able to guess, the “sponsored” attributes is for links that have been paid for or are part of a sponsored piece of content. This indicates to Google that it is not a natural link, while it may not be completely disregarded by crawlers if it still seems relevant.

Webmasters can still use the “nofollow” attribute for links that don’t class as “ugc” or “sponsored” but they don’t want to explicitly endorse or pass “link juice” to. For example, a large number of user-relevant links on one page.

Why is everyone freaking out?

When Google first tweeted about these new link attributes, lots of SEOs were panicking about the extra workload. There were questions about whether webmasters would have to go through their sites and change all nofollow links to use the new attributes where relevant. There were also concerns about whether it would be possible to get users to user the “ugc” attribute on blog comments etc.

What does Google say?

If you go and read Google’s actual blog post on the topic, they explicitly state that you DON’T need to go and change your existing markup:

“If you use nofollow now as a way to block sponsored links, or to signify that you don’t vouch for a page you link to, that will continue to be supported. There’s absolutely no need to change any nofollow links that you already have.”

So no need to panic. It’s simply something you can choose to use from now on to help Google better understand the links from your site.

You can find out more information on the new attributes here on the Google Webmasters Blog. 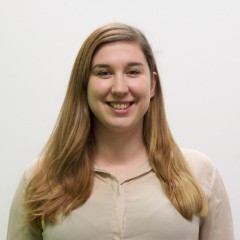 Rachel has been working at Kumo since the start of 2018 and is a Search Engine Marketer and Head of Content. She makes sure all Kumo's clients always have fresh, engaging content that helps their websites rank and attract links.

She is also fluent in German, which comes in handy for any German websites that need content and SEO work!